Our family's stay in Shanghai, China

Map of my planned bike tour

One of the places I (Dave) have always wanted to visit is New Zealand, its remote location and reputation for natural beauty have long enticed me. The girls (my wife and 2 daughters) decided they would rather relax with some beach time and see more of Australia than add another destination, so for the first time ever, we split up our vacation time. After reading about the great cycling in NZ, I mapped out a 4 ½ day visit, bicycling several routes centered around Queenstown, on the South Island.

Queenstown is a town of about 15,000 where bungee jumping was invented, and bills itself as “The Adrenalin Capital of the World”. Other popular activities include skydiving, skiing, mountain biking, heli-ski or biking (a helicopter drops you off on trails inaccessible by road, then you ski or mountain bike down), whitewater rafting, jet skiing, and many others. If you need adventure in any season, this is the place for it!

The suspension bridge that was the site of the world’s first commercial bungee jumping operation in 1988. I rode past it on the last day of my tour and watched one person jump– and one person chicken out.

New Zealand also abounds with nature trails for hikes that can vary in length from a half hour to several days.

Queenstown has the feel of a college and ski town combined. I only saw a few fellow middle-aged people, it is mostly frequented by college students- many from Europe on their gap year- on backpacking trips, and well-off retirees.  Queenstown is filled with pubs and restaurants, backpacking hostels, and outdoors shops, in a compact downtown surrounded by hillside homes on the shores of Lake Wakatipu. Wakatipu is a Maori name (the Maori are the indigenous people of NZ, like the Aborigines of Australia), and legend says it was formed from the depression of a giant sleeping on his side.

I set several cycling goals for myself every year, and decided to use this trip to attempt 2: my longest ride ever (longer than 200km/124 miles) and 4 consecutive “century” (100 mile) rides. Why? To challenge myself of course, but also as training for the US cross-country ride that I want to do. A cross-country ride must be more than just a personal challenge; however, I want to use it for a charitable purpose of some sort.  I just don’t which of many noble causes yet (and am open to ideas. . .)

As I flew into Queenstown, crossing the South Island from Auckland on the North Island, it was easy to get excited about the days ahead, with views of snow-capped mountain peaks, beautiful lakes in the valleys, and very little development (there are only about 1 million residents of the South Island, which is 50% larger in area than the entire state of Indiana).

As I stepped off the plane onto the tarmac, I breathed what has to be the freshest air of my life, on a sunny and crisp Autumn day in April. 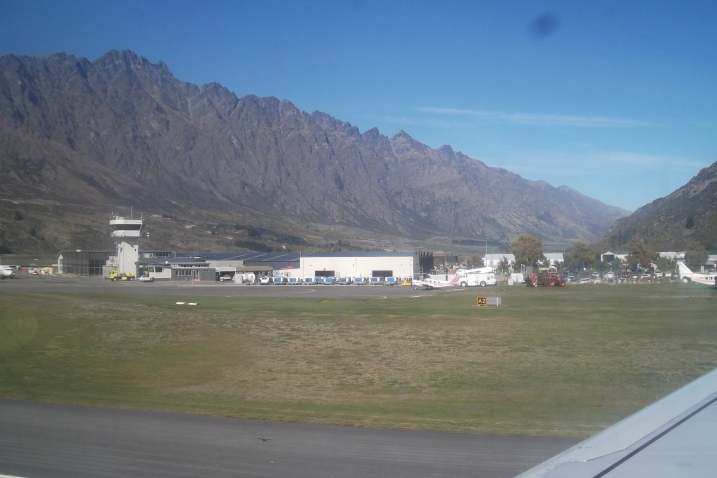 Queenstown Airport is often ranked among the world’s top 10 airports to get a window seat when flying into (am I glad I did). It is easy to see why.

As beautiful as New Zealand is, if a picture is worth a thousand words, seeing it in person must be worth 10,000 pictures. Words and photos are so insufficient!

Arriving on Wednesday afternoon after a layover in Auckland, I quickly rented a car, assembled my bike, and headed out. Driving and riding on the left (“wrong”) side of the road in Australia and New Zealand was enough of an adjustment, especially after not driving a car at all for several months while we’ve lived in Shanghai.  Shifting the manual transmission rental with my left hand definitely took some getting used to.

My first taste of New Zealand cycling was a short 30-mile warm up ride on the gently rolling road between the shores of Lake Wakatipu and the mountain range named appropriately, The Remarkables.

Welcome to New Zealand! The Remarkables and Lake Wakatipu.

The road along Lake Wakatipu was a thrill both to drive and ride.

In awe of the beautiful surroundings, I wish I had time to ride longer, but had to reach my stop for the night in Te Anau.  Traveling fast and light into remote towns and villages, I stayed in mostly backpacker type hostels that close at 8 or 9.

For my cycling buddies, I was riding my folding travel bike that I originally purchased to use while living in Shanghai.  There are a surprising number of companies that build folding bikes, and after much research I settled on a Bike Friday.  It is built in Oregon with standard components (Shimano drivetrain, etc.) making it easy to service and is equipped with eyelets for mounting racks and panniers (saddlebags).  I chose a model with drop-bar road bike handlebars.

Bike Fridays are known for being ridden all over the world by bicycle tourists.  I love mine; it has a similar riding position to my Specialized road bike, though is a bit lower with different handling characteristics.  Since it has a steel frame vs. aluminum or carbon, it is heavier.  With its small 20-inch wheels, it can be mistaken for a kid’s bike and gets many strange looks.  But those characteristics allow it to be disassembled and folded into a standard-size hard shell suitcase in about 20 minutes, so I will use it for years to come as I travel.

There are more sheep than people in New Zealand- this one eyed me as if to say “what are you doing here?”

Day 2
I was on the bike by 5am so that I could ride 100 miles to reach Milford Sound by lunchtime for a cruise of the fjords. I always like to watch the sunrise from the saddle, but this was especially the case in New Zealand.  The mountains create a prolonged dawn, as the sun rises behind the peaks, so the sky lightens for a couple hours before you actually see the sun.

I took this picture during the slow sunrise, as I rode through valleys and past lakes into Fjordland National Park, and flat grassland gave way to hilly rainforest.

As I climbed my first of 3 mountain passes on the trip to 1000 meters of elevation, I entered what appeared to be a cul-de-sac of mountains, with a semi-circular ridge of solid rock at least a couple of thousand feet above the road.  Finally, I arrived at the Homer Tunnel, which was hand hewn from 1936 until finally being completed in 1954 (you can see the rough interior from the picks).

climbing up to the Homer Tunnel

The mountains here are the southern Alps- and in Australia also.  I have always considered the Alps in Switzerland, Austria, southern Germany, and Slovenia as perhaps my favorite destination anywhere in the world.  I never knew that there were mountains named the Alps outside of Europe!

Having read about cycling through the Homer Tunnel, I can’t say that I looked forward to the experience, facing a slick descent in a dark narrow tunnel with traffic.  Fortunately, I reached the entrance to follow several other cars through, as lights alternated the direction of traffic, and did not get passed as I gingerly rode through the 1.3km long tunnel.

The entrance to the Homer Tunnel- a bit intimidating for a cyclist.

I took a minute for a picture at the exit and was rewarded with a view of a snaking descent that was the most exhilarating road I have ever bicycled.  It reminded me of a smaller version of the Stelvio Pass in Italy (a bucket list item to ride or drive).  What a thrill it was to twist and turn towards the ocean, down the forest covered mountain road that was not as steep or treacherous as later descents, reaping the benefits of the effort uphill.  For several miles, I only pedaled occasionally and took in the surroundings (one of the advantages of bicycle touring: time to enjoy the scenery).

The descent from the Homer Tunnel- spectacular! (click the linked photo for a better image of the panoramic).

I made it to Milford Sound with time to spare, and headed out on a cruise to see the Sound (technically a fjord) up close. The pictures speak for themselves, what incredible natural beauty!

As beautiful a scene as I have ever witnessed in my life. (click the linked photo for a better view of the panoramic). 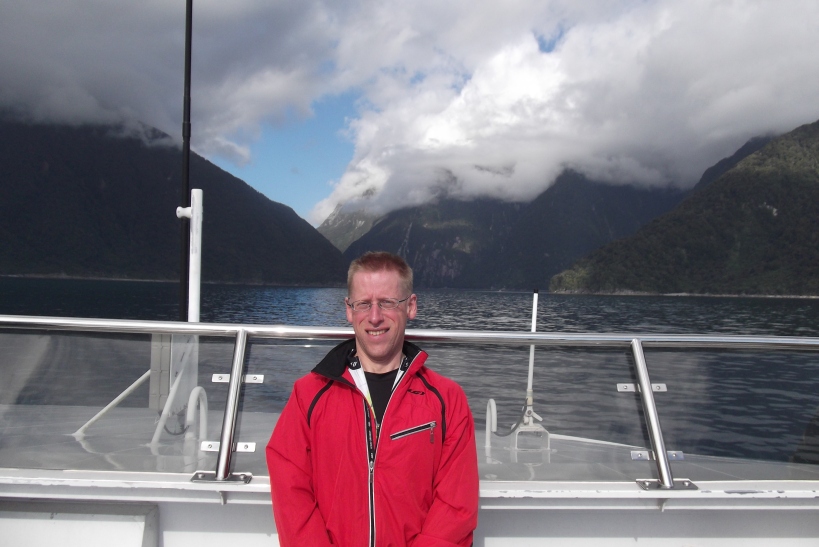 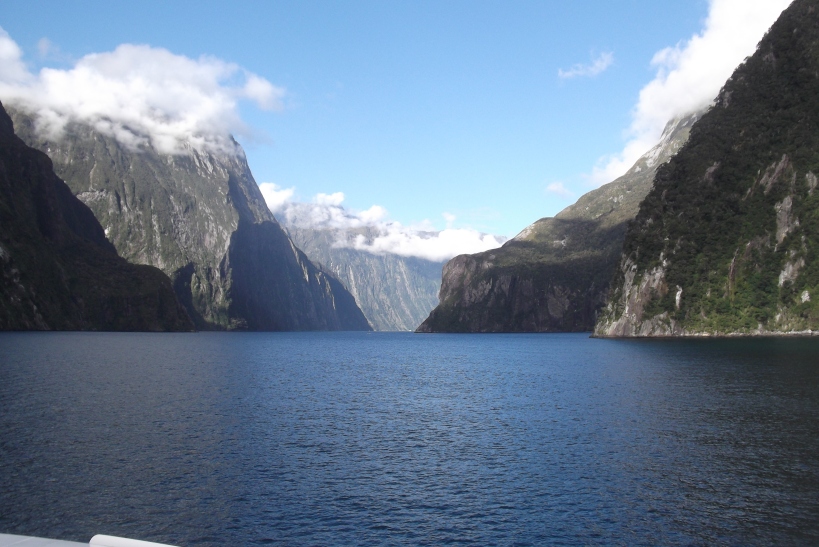 Looking back towards Milford Sound.

Have you ever seen such blue sky?

An hour and a half on the water flew by much too fast.

On the way back, I met 2 college interns, one from Chicago and one from Norway. The one from Norway commented that the mountains in New Zealand’s Fjordland were much higher and more majestic than Norway’s, and he seemed very impressed.  This is a relatively remote place, 175 miles from the nearest major airport with only one road in, so anyone who visits is making a concerted effort to see this picturesque and unspoiled place.

Next up: Day 3, starting with the big climb