Our family's stay in Shanghai, China

After a short overnight stop in Queenstown, I headed out early Friday morning for 3 more days of touring solely by bicycle.  After about 15 miles, I reached what would be my toughest climb– of the tour and of my life.  The Crown Range Road is a legend, for both cyclists and car enthusiasts.  Cresting at 1076m, it is New Zealand’s highest public road, with spectacular views along the way. 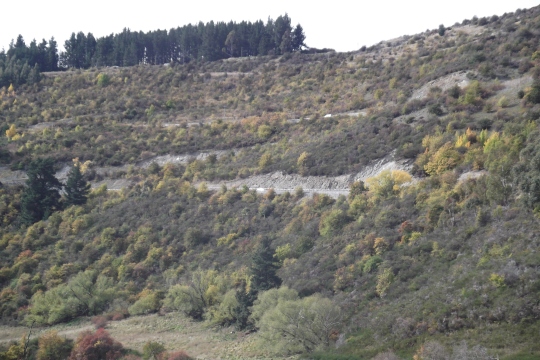 The “zig-zags” on the lower section of the Crown Range Road.

Beginning the ascent with zig-zag hairpin curves, I spent most of the next hour and a half in my lowest “granny gear”.  After the zig-zags, the climb temporarily relents but then gets steeper, so much so that I had to weave across both lanes to lessen the grade and keep moving: at 3-4mph much of the way up! 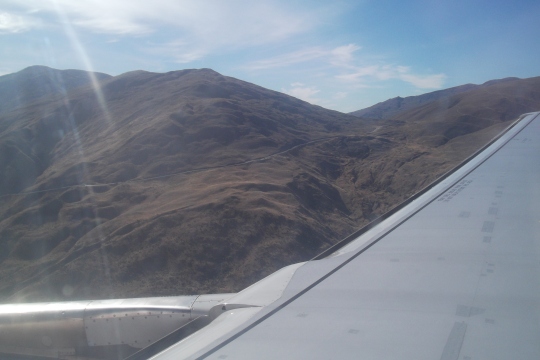 I got a close-up view of the Crown Range Road as I flew in to Queenstown.

Near the top, I came across a road construction crew, and the flagman called out “almost there, mate!”  “Almost there?  Awesome!” was my panted reply. Unfortunately, “almost there” to him was relative to being in a car.  It was probably another mile, which doesn’t seem like much, but that’s 15 more minutes of riding at 4 mph with the steep grade. 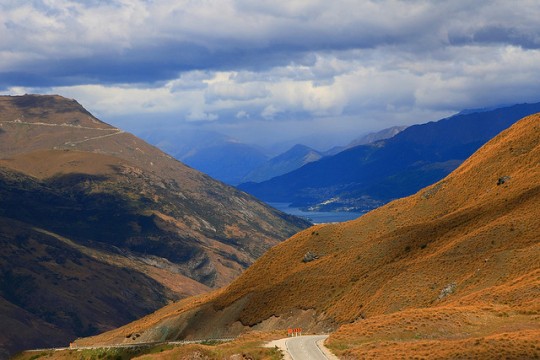 The view makes the climb worth the effort!  (my camera battery was dead, so this photo was borrowed from the NZ Tourism website)

Cresting the Crown Range pass, I headed down.  Fast.  My Bike Friday is very convenient, but the short wheelbase makes for twitchy handling and I had to limit descents to under 30mph.  With a full-size road bike and nerves stronger than mine, it would have been easy to hit 40-50mph or more.  I never stopped on the ascent, but was forced to on the descent in order to cool my brakes.  A couple times I hit a bump and thought I might go down, which can get very scary, very fast on a road like this.  I did make it through the entire tour with only 1 minor crash, when I dropped the chain on a steep hill, but it was nothing serious as no cars were around.

Sidebar: please ALWAYS allow at least 3 feet/1 meter when passing a cyclist.  This is already required by law in many US states and foreign countries, to create public awareness. Having space to maneuver around those bumps and potholes is even scarier when motorists pass with inches to spare.  I know it is frustrating to wait for room to pass behind a slow moving bike, but a minor crash or swerving around obstacles can become a deadly event if a car is passing too close.  And NEVER honk to “let the cyclist know you are there”.  While very well intentioned, it startles the cyclist and can cause a crash.  THANK YOU!!

Enjoying the morning sun and a descent that gradually turned rolling, I came to Wanaka, a gorgeous and active lakeside community.  I could live here; Wanaka was my favorite town I visited. 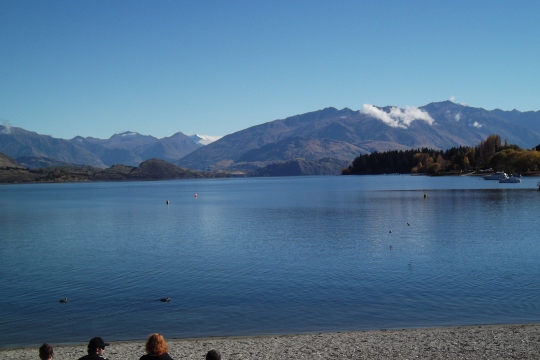 the shores of Lake Wanaka

You have to love a town where 3 coffee shops side-by-side are all doing a brisk business, as everyone takes in the lake and mountain views. 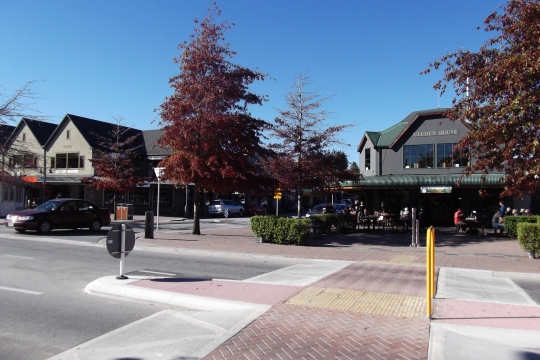 I stopped in one café for a rare break, for some strong coffee and a snack of real food (energy bars get very tiring), but more importantly to borrow an outlet to charge my camera battery.

Tearing myself away from Wanaka, I headed out for a few hills as the road wound along between Lakes Wanaka and Hawea. 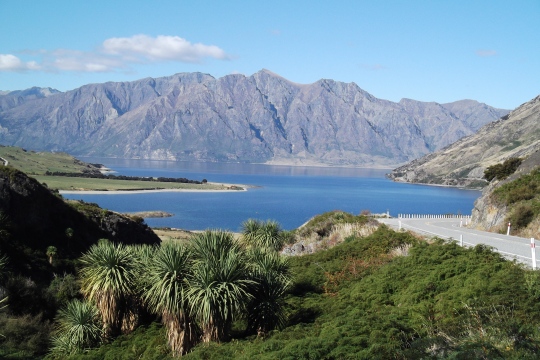 The hills slowly gave way to the Makarora River valley, another lush, scenic, and thankfully relatively flat terrain, and into Mount Aspiring National Park.  If I had one more day, I would have continued on this road to the west coast of New Zealand where there are several glaciers. 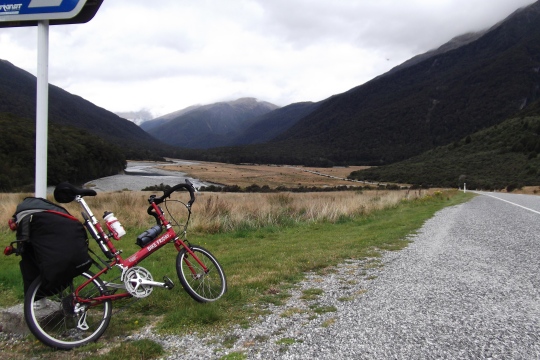 It was hard not to keep stopping for photos!  When I did stop, my bike made for a great conversation starter. 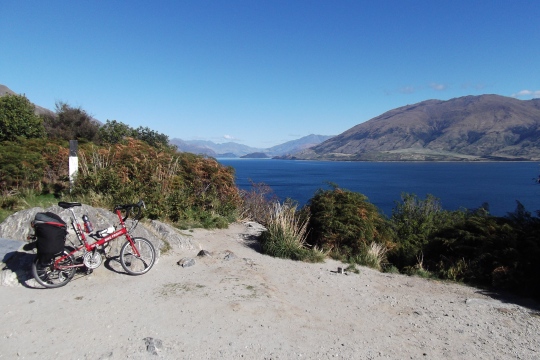 At this scenic overlook, I chatted with a young couple- he was from Germany and she from Holland- who were driving through. Even though they had spent several months in New Zealand, they were just as mesmerized by the breathtaking scenery.

Topping 100 miles again, my Friday night stop was in the village of Makarora (population 30).  This was my favorite overnight, I stayed in a spartan but comfortable private cabin that can sleep 4, that cost me 33 New Zealand dollars (less than 25 US dollars).  It might have been the first time in my life that my hotel room cost about the same as my dinner. 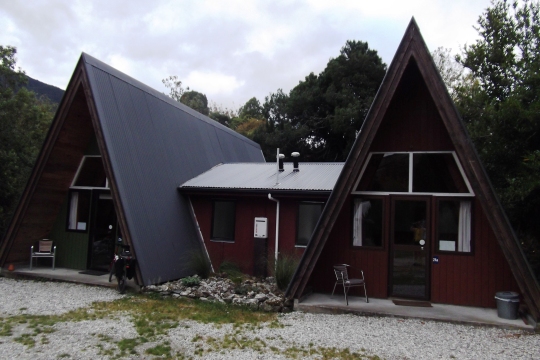 My cabin in Makarora (front 1/2 of the one on the left), where my bike is parked 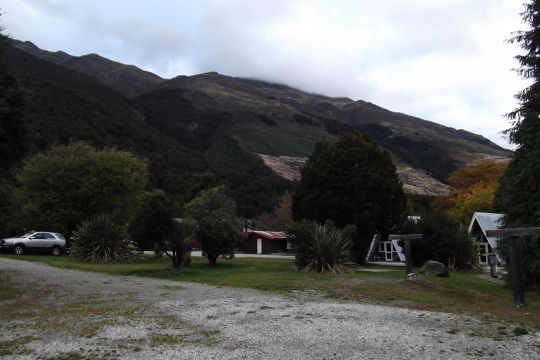 The view from the front porch of my cabin.

Dinner in the adjoining café was simple but perfect for a bike tour, a tasty vegetable pasta accompanied by one of New Zealand’s great local beers.  Searching for healthy, hearty, and convenient food was a minor challenge each evening, since riding 100 miles at a relatively moderate pace burns an extra ~4000 calories per day.

Many cycle tourists bring their own food (and often camp out), but I packed light, with just a change of clothes, bike tools, and a load of energy bars to get me through each day.  That doesn’t seem like much, but with temperatures ranging from the upper 30s to the mid 60s (F), I had to carry a wide variety of cycling attire and my panniers (saddlebags) were stuffed full.

map and elevation profile of Day 3 ride, from Queenstown to Makarora via the Crown Range Road

Saturday was another pre-dawn start, having turned around at Makarora and taking advantage of what was now a tailwind that I had fought for much of the previous afternoon.  I aimed for my longest ride on Saturday, so I needed an early start.

Early Saturday morning, I came across a mountain bike event- passing hundreds of cyclists, most of whom smiled and waved as we passed in opposite directions. 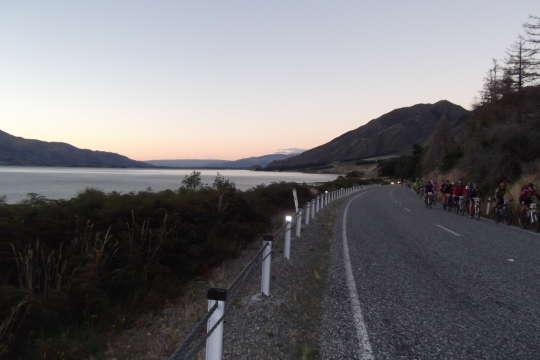 Mountain bikers on the road at dawn. 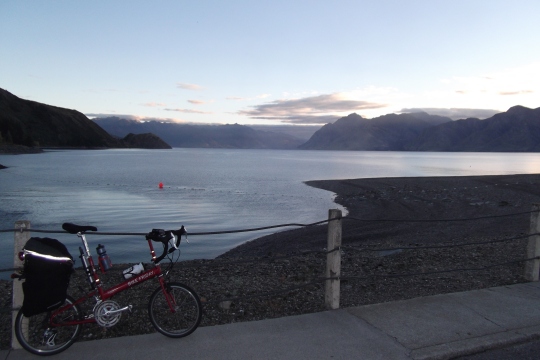 Skirting Lake Hawea, I started the long climb up the Lindis Pass, one of the highest in New Zealand at 971m, but with a much more gradual slope. 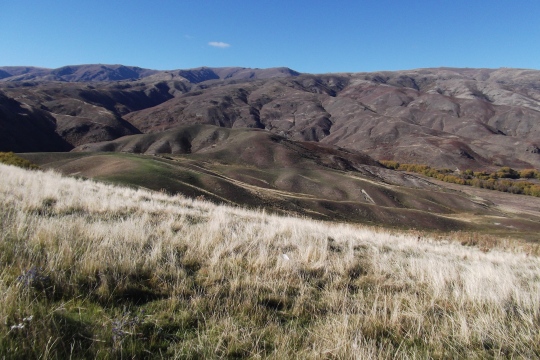 The grassy slopes along the way to the Lindis Pass. 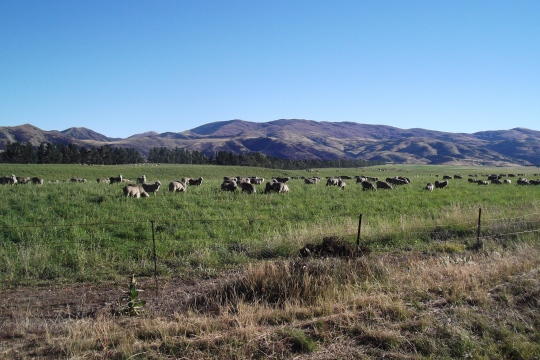 A common sight in New Zealand- herds of sheep.

The terrain varied again, from the mountain lakes, to valleys of scrub brush and trees, and as I climbed the pass, mostly grass covered slopes with few trees- but always sheep! 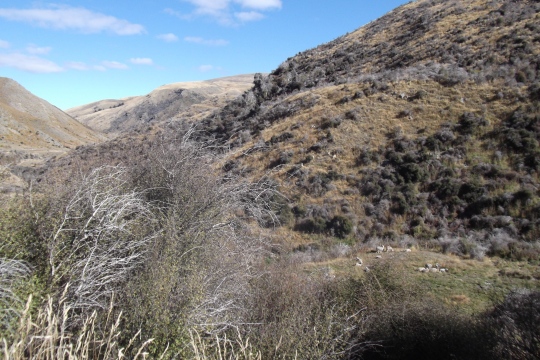 Turning around at the Lindis Pass, I headed back down the mountain, and encountered another cycle tourist.  Rich, an older gentleman who lives on the North Island, stopped as he came the other direction.  We had a very nice chat on the side of the road for at least 20 minutes, talking about New Zealand and cycle touring.  As I raved about how much I loved New Zealand and want to come back with my family, he gave me some encouraging tips on family friendly multi-day hiking routes (or tramping as they call it here), with cabins for overnight stops- no camping required.  I only wish I had thought to take his picture. 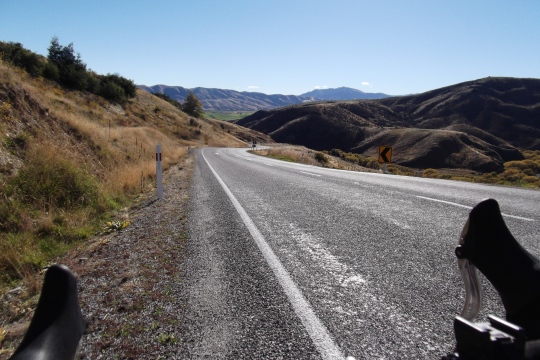 A great viewpoint for the day. 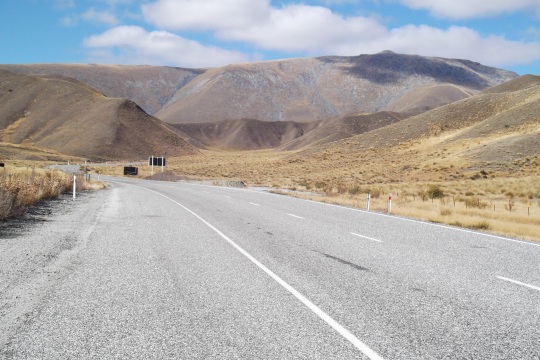 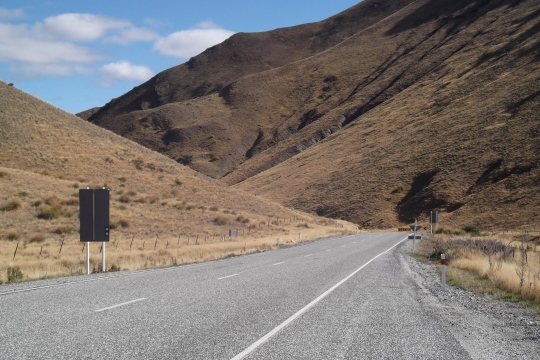 The descent is always worth the climbing effort!

The story of today’s ride was a lack of water.  Most of the New Zealand state highways have many rest areas where I could refill my water bottles.  Today, however, I found none so I started to ration water early in the day.  Finally, with about 15 miles to go, I came across a rest area.  Hallelujah I thought!  This will make the last bit of the ride easier, having already gone about 115 miles under mostly sunny skies.  Pouring Gatorade powder into my bottles, I turned the corner into the men’s room, relief just seconds away.  Then I stopped at the sign on the door “non potable water (do not drink)”.  I was not happy!  The long driveway into the rest area had done nothing but add another mile to my ride.

Back on the bike, I toughed out the last few miles.  Reaching my room in a camping park in Cromwell, I quickly filled my water bottles, immediately downed about 40oz of Gatorade, and took a 20-minute nap to recover.  Total for the day: 129.1 miles, my longest day ever, goal #1 accomplished!

The lack of guardrails on some of the hilly, twisty roads were a bit scary: 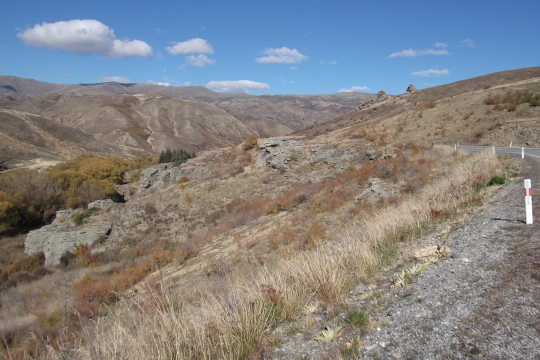 I rode in the middle of the lane on this road, otherwise one slip and it would have been a very long fall.

The only negative aspect of long days of cycling in New Zealand was the rough surface of the chip and seal roads.  As I rode, my arms were oscillating like a banjo string, which beat up my shoulders and neck, by far the toughest aspect of the tour.

Next up: the tour finish with rail trails, river gorges, and movie scenes